"Down On Penny's Farm" - The Bently Boys 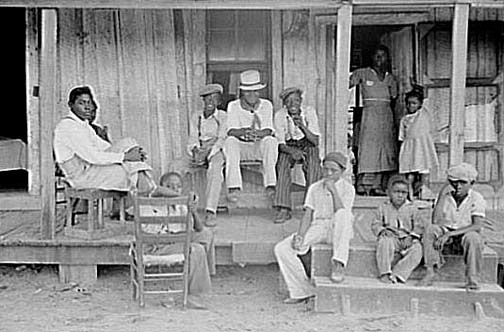 Nothing is known about the Bently Boys. They were possibly from North Carolina.

The song "Penny's Farm" deals with sharecroppers. Although it had existed earlier, sharecropping emerged in the southern United States following the Civil War and emancipation as a way for plantation owners to get cheap labor. It also emerged as a legal means of perpetuating the iniquities of slavery.

Under the sharecropping system, farm owners assigned or "rented" a plot of land to the sharecropper who worked and lived on the land. The owner provided seed and tools and collected a share of the harvested crop, usually half. The sharecropper was also allowed to plant their own produce for food. The larger farm owners often set up a miniature economy on their land, with stores and services provided for a price. Some plantations, like the Dockery Plantation in Mississippi, even printed their own currency. Since the renters usually had little or no money of their own, they were allowed to buy necessities from the plantation store on credit, which was then deducted from the renter's share of the harvest at the end of the year. This often kept the sharecroppers in a state of constant crippling debt, unable to earn enough money to leave the plantation and barely able to earn a living. In essence, the sharecropping system was a feudal system.

This system is admirably described in "Penny's Farm." According to Harry Smith's liner notes, the song is a "renationalized recasting of an earlier song 'Hard Times'." The song was also recorded by Gid Tanner and The Skillet Lickers as "Tanner's Farm." The melody and first few lines were borrowed by Bob Dylan for his song "Hard Times In New York Town," a song recorded for his first album, but left unreleased in until 1993's The Bootleg Series, 1-3. The first verse of the Dylan song is as follows:

Come you ladies and you gentlemen, a-listen to my song.
Sing it to you right, but you might think it's wrong.
Just a little glimpse of a story I'll tell,
'Bout an East Coast city that you all know well.
It's hard times in the city,
Livin' down in New York town.

Bob Dylan also alludes to "Penny's Farm" in his 1965 song, "Maggie's Farm," released on Bringing It All Back Home.

"Penny's Farm" is the first song on the Anthology that can be genuinely called a "protest" song. The song's speaker exposes the abuses of the sharecropping system, while at the same time poking sly fun at them. Former 10,000 Maniacs singer, Natalie Merchant, recorded a version of this song for her 1993 album, The House Carpenter's Daughter.

Come you ladies and you gentlemen and listen to my song.
Sing it to you right, but you might think it's wrong.
May make you mad, but I mean no harm.
It's just about the renters on Penny's farm.

Hasn't George Penny got a flattering mouth?
Move you to the country in a little log house.
Got nothing it but the cracks in the wall.
He'll work you in the summer and rob you in the fall.

You go in the fields and you work all day.
Till way after night, but you get no pay.
Promise you meat or a little lard,
It's hard to be a renter on Penny's farm.

Here's George Penny, he'll come into town,
With his wagon-load of peaches, not one of them is sound.
He's got to have his money or somebody's check.
You pay him for a bushel and you don't get a peck.

George Penny's renters, they'll come into town,
With their hands in their pockets, and their head a-hanging down.
Go in the store and the merchant will say:
"Your mortgage is due and I'm looking for my pay."

Down in his pocket with a trembling hand,
"Can't pay you all, but I'll pay you what I can."
Then to the telephone the merchant make a call.
They'll put you on the chain gang don't pay it all.

The Bently Boys performance is good humored, but pointed. The singer sounds - at times - like he can barely keep from laughing. Yet the song sets the template for the more politically charged folk music of later performers such as Woody Guthrie, Pete Seeger, Joan Baez, and Bob Dylan. The sympathy expressed in the song for the underdog is also a feature of the left-wing politics later associated with folk music. For the most part, Smith avoids politics on the Anthology, although a few overtly political songs will be heard on volume four.

"Down On Penny's Farm" is thematically related to Kelly Harrell's "My Name Is John Johanna." Both songs deal with the exploitation of farm labor in a humorous fashion.

"Down On Penny's Farm" is the first of three songs in a row describing the hard times of farmers. These songs bring the "Ballads" volume into the era of the Great Depression, making these the first songs on the Anthology to describe conditions the musicians themselves were facing.


The Curse of the Shameless Plug Department: Check out the long awaited(?) fourth episode of the "Where Dead Voices Gather" podcast. On this all-blues episode, you'll hear New Year's greetings from Lightin' Hopkins and Mary Harris, as well as Delta Blues by Son House, Willie Brown and Charlie Patton. You'll also hear recordings by more obscure figures like Geeshie Wiley, Blind Joe Reynolds, William Harris, and more. Also available on iTunes! Subscribe today so you don't miss a single episode. It's free and it doesn't hurt. Who can ask for more?

Raymond Crooke is back, performing a version of "Down On Penny's Farm" that hews closely to the Bently Boys recording, although with some lyrical variations.


Download and listen to The Bently Boys - "Down On Penny's Farm"
Posted by Alexander at 2:55 PM