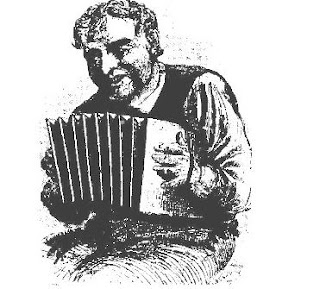 Columbus Fruge (or Frugé) was from Arnaudville, Louisiana, a town in the St. Landry and St. Martin parishes in south-central portion of the state. Neither his birth date or his death date have been recorded. Virtually no details of his life exist, other than the fact that he began playing accordion as a child and was performing around his hometown by the age of eleven. In 1929, Frugé traveled to Memphis, Tennessee where he recorded four sides for Victor Records, including this version of "Saut Crapaud."

The accordion is a bellows driven free-reed aerophone instrument. Sound is produced when the bellows pushes air past a vibrating reed in the frame of the instrument (a diagram illustrates this here). Modern accordions have two sets of keys on the left and right sides of the bellows. The right hand keyboard, which sometimes resembles a piano keyboard, is used to play the melody while the left hand side is made up of preset keys which are used to play the accompaniment. Depressing the keys causes valves, called pallets, to open. This allows air to flow past strips of brass or steel, called reeds, producing a given note or chord. There are several different kinds of accordions. Bisonoric accordions produce different pitches depending on the direction of the bellows' movement. Unisonoric accordions produce the same pitch regardless of the direction of the bellows' movement. Accordions can also have different kinds of keyboards, ranging from the diatonic to the chromatic to the more familiar piano-style keyboard.

The accordion dates to early 19th-century Germany. It is generally believed to be the invention of Christian Friedrich Ludwig Buschmann, a Berlin instrument maker, in 1822 (although this has been disputed). The first instrument to use the name "accordion" was invented in 1829, in Vienna, by Cyrill Demian. It became immediately popular in Europe. By the 1830s, the instrument had spread to Britain and by the 1840s it had reached the United States. Its relative cheapness made it a popular instrument. Another reason for the accordion's popularity is its full sound. Since it is possible to play both a melody line and accompanying harmony, the accordionist is a veritable one man band. Small ensembles could nevertheless produce a very big sound (my grandfather, violinist Harry Stern, played for years in a duo with an accordionist).

The accordion soon became used in various folk musics, including Polish, Colombian, Korean, and South African musics, in addition to Cajun music. The polka craze of the early to mid-19th century is credited with contributing to the rapid spread of the accordion's popularity. Between 1910 and the 1960s, the accordion found a central place in American popular music (including the music of Lawrence Welk), which lead in turn to a popular backlash against the instrument. Although a great deal of wonderful music has been made, and continues to be made, on the accordion, the instrument generally has a poor reputation among music fans, with many people citing the accordion as their least favorite instrument.

In his notes, Harry Smith states states that "Saut Crapaud" is "the most widely known of any Arcadian (sic) dance tune." The song has a repetitious melody and strong beat, which is kept by the regular tapping of Frugé's feet. The lyrics are hard to make out, but what can be heard is generally restricted to the following couplet:

Jump toad (or frog), your tail will burn.
Take courage, it'll grow back.

According to Henry S. Wright, who consulted on the song's French lyrics, the rest of the song's vocal parts appear to be repetitions or variations of this couplet. According to Wright, the lyric is a double entendre, with the "tail" signifying the male sexual organ.

"Saut Crapaud" is the first of three Cajun songs in a row, all of them featuring the accordion (solo on the first track, in combination with other instruments on the other two). It is significant that Smith included Cajun music on the Anthology, as many surveys of Southern American music usually focus on early country and blues, forgetting about this important ethnic group. For more on the Cajun people and a capsule history, see the entry on "La Danseuse".

Things I Love About the Internet Department: Since I posted this entry on Sunday, I have received further information on Columbus Frugé and the song "Saut Crapaud." According to Neal Pomea, who posted this information on the Organissimo Bulletin Board, Frugé lived into the 1980s. Neal posted links to two 1981 recordings by Frugé (with Johnny Richard on drums and James Thibodeaux on rhythm guitar). You can check them out here: "Arnaudville Two Step" and "Valse de LeBouef." The songs were released as two sides of a 45RPM single on the Buffalo record label. Neal also provides a more fleshed out transcription of the lyrics to "Saut Crapaud":

Thanks to Neal for this valuable information!

The Shameless Plug Department (who?): The fourth episode of the "Where Dead Voices Gather" podcast is still the most recent. It is my intention to do a fifth episode in the near future, although for the time being I am busy acting in the Capital Repertory Theatre production of To Kill A Mockingbird. As soon as I have more time, you can rest assured that I will do a new episode of the podcast. In the meantime, you can listen to this all-blues episode where you'll hear New Year's greetings from Lightin' Hopkins and Mary Harris, as well as Delta Blues by Son House, Willie Brown and Charlie Patton. You'll also hear recordings by more obscure figures like Geeshie Wiley, Blind Joe Reynolds, William Harris, and more. Also available on iTunes! Subscribe today so you don't miss a single episode. It's free and it doesn't hurt. Who can ask for more?

I've been unable to find any modern video of "Saut Crapaud." Instead, here is an example of modern Cajun music featuring the accordion. This is accordionist Charles Thibodeaux accompanied by guitar and fiddle performing "Jolie Blonde Blon."

Download and listen to Columbus Fruge - "Saut Crapaud"
Posted by Alexander at 6:34 PM