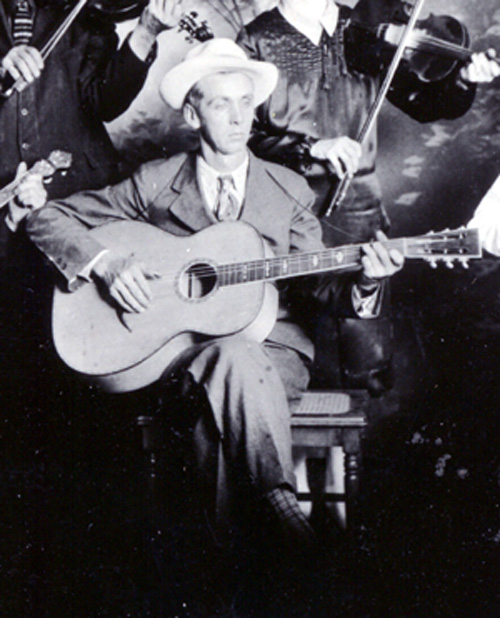 Born on May 25, 1893 in Carroll County, Virginia, Ernest V. Stoneman was steeped in the musical traditions of the Blue Ridge Mountains. Left motherless at the age of three, Stoneman was raised by his father and three cousins who taught him guitar, banjo, autoharp, harmonica, and the jaw harp. Stoneman also sang and wrote his own songs.

In November of 1918, Stoneman married Hattie Frost, who also came from a musical family. Hattie Stoneman gave birth to twenty three children, thirteen of whom lived to maturity and all of whom played at least one musical instrument.

Stoneman was primarily a carpenter who played music for pleasure until 1924. That year, Stoneman reportedly heard a record by Henry Whitter. Stoneman believed he could do better and by September of that year managed to convince the Okeh record label to record him. Directed by Ralph Peer, Stoneman recorded several sides for Okeh and Victor, as well as freelancing for several other labels (including Paramount and Gennett). By 1926, he formed a string band featuring Hattie and fiddler Eck Dunford. Various children would round out the Stoneman Family band over the years.

In July and August of 1927, Stoneman worked with Ralph Peer to organize the historic Bristol Sessions in Bristol Tennessee.

In May of that year, Ernest and Hattie Stoneman recorded "The Mountaineer's Courtship" at a session in New York City. Hattie Stoneman plays guitar and Ernest plays harmonica. Both sing on this recording. Stoneman continued recording until 1929.

The Stoneman family relocated to Washington, DC during the Depression. In 1941, Stoneman bought land in Carmody Hills, Maryland and went to work in a Naval gun factory. In 1947, the Stoneman Family returned to show business, winning a talent contest that landed them six months exposure on local television. In 1956, Stoneman appeared on The Big Surprise, a game show, winning $10,000. By this point, several of Stoneman's children had formed a bluegrass band called The Bluegrass Champs, winning Arthur Godfrey's Talent Scouts. Meanwhile, Ernest (now known as "Pop" Stoneman) and Hattie recorded for Folkways Records.

In the early '60s, the Stoneman Family reunited, moving to Nashville, signing with MGM, and launching a syndicated television program. The group won the Country Music Association's "Vocal Group of the Year" award in 1967.

"The Mountaineer's Courtship" is also known as "When You Comin' To Court Me," "Dear Old Mountain Boy," "Buffalo Boy," and "The Country Courtship." It's a shaggy dog story sung as a dialogue between a bride-to-be and her fiancee.

The song is a dialogue between a man and a woman. In most of the verses, the woman asks a question and the man answers. Each of the questions ends with the line, "my dear old reckless boy". In other versions of the song, the "reckless by" is a "mountain boy" or a "Buffalo boy." The answers nearly always end with the line, "if the weather is good." Some sources claim that the song goes back as far as the 1600s. Most versions of the song have the woman break off the engagement, singing something along the lines of,

This version leaves out the punchline, preferring to add two unrelated verses about "aunt Sally" and her "old gray goose," possibly inspired by the mention of "Sally" as one of the man's six previously unknown children (although only four are named and five are mentioned).

In his notes, Smith points out that the two unrelated verses come from "one of the most widely known American songs," sometimes known as "The Old Gray Goose" or "Go Tell Aunt Rhody."

The Stoneman's appear again on the very next selection, "The Spanish Merchant's Daughter," another humorous dialogue.

Here's the Stoneman Family during the '60s (you can see Pop Stoneman in the background) performing "The Five Little Johnson Girls."

Here's another appearance by the younger Stonemans performing "Big Ball In Monterey" in 1965.

Here's a version of "The Mountaineer's Courtship" performed by an unknown duo.

Download and listen to Mr. and Mrs. Ernest V. Stoneman - "The Mountaineer's Courtship"
Posted by Alexander at 7:31 PM