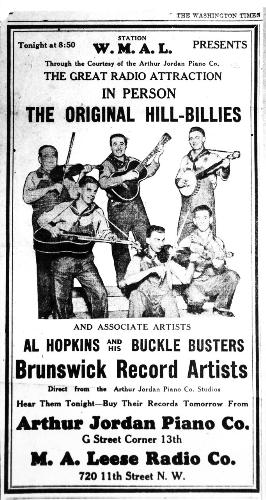 Born in Watauga County, North Carolina in 1889, Albert Green Hopkins was one of the first true country musicians and one of the originators of "hillbilly" music. Hopkins was born to John Benjamin Hopkins, a state legislator, and Celia Isabel Green Hopkins. Both parents were musical. Hopkins' father repaired organs as a hobby and played fiddle, piano and organ. His mother sang ballads and church music. Hopkins primarily played piano.

The Hopkins family relocated to Washington D.C. in 1904 when Hopkins was fifteen. In 1910, he and his brothers Joe, Elmer, and John formed the Old Mohawk Quartet, a group that played around D.C., frequently appearing at the Majestic Theater. In the early 1920s, Hopkins moved to Galax, Virgina where he worked for his older brother, Jacob, was a doctor with an established practice. He also entertained his brother's patients. In 1924, Hopkins and his brother Joe formed a band with fiddler Alonzo Elvis "Tony" Alderman and banjo player John Rector. After an aborted recording session in 1924, the group recorded six selections for Ralph Peer in New York City on January 15, 1925. At that session, Peer asked the still-unnamed band what they were called. Hopkins modestly replied that they were "just a bunch of hillbillies." Peer named their group "The Hill Billies," much to the musicians' consternation (none of the members of the group conformed to the "hillbilly" stereotype). Alderman would later say that to them the word "hillbilly" was a "fighting word." Nevertheless, Hopkins and his group were associated with the word hillbilly and they tried for a time to control the word's use, at least as far as it was applied to music. Eventually, they were forced to accept that hillbilly had become a genre of music.

Recording alternately as the Hill Billies and as the Buckle Busters, Hopkins and his band (which went through varying line-ups) were the first country band to perform in New York City, the first to perform for an American President (Calvin Coolidge), and the first to appear in a film. Hopkins recorded the song "West Virginia Gals" in New York City during a 1928 session. While the group was credited as the Buckle Busters, none of Hopkins regular musicians appear on the recording, nor does Hopkins play piano.

Hopkins was killed in a car accident in Winchester, Virginia on October 21, 1932. His group disbanded upon his death.

"West Virginia Gals" is a variation of a minstrel song published under the title "Free Nigger" in 1841. "Free Nigger" was published without a composer credit. The tune is similar to that of "A Lazy Farmer Boy" and is likely related to that song.

Given Hopkins relatively middle class background, it is likely that the extremely primitive style of "West Virginia Gals," a song that pokes fun at the poor rural folk of that state, is satirical.

The song, of course, warns West Virginia girls not to court the boys of that state ("Free Nigger," the song "West Virginia Gals" derives from, warns Virginia girls not to marry Carolina boys). The song indulges in the most extreme stereotypes of "hillbillies" or "white trash" (this is ironic given the offense that Hopkins and the members of his group took at being called hillbillies themselves). Extremely politically incorrect by today's standards as this song is, it is worth remembering that racial, ethnic, and regional humor were commonplace and acceptable forms of entertainment during the 1920s. And as much as "West Virginia Gals" might offend our sensibilities today, it is still possible to enjoy the song based purely on its musical merits.

While the primitiveness of the performance is likely a pose, it nevertheless gives the song a raw excitement. Hopkins sings the song with an exaggerated yelp at the end of most of the lines. The song also parodies the rural pronunciation of such words as "tobacco," "chimney," and "molasses." If the song is not authentically rural, it is (at the very least) authentically weird, which makes it a candidate for inclusion in Smith's survey.

The other musicians featured on this recording are Ed Belcher on fiddle and Walter Hughes on guitar.

I can't seem to find a version of the "West Virginia Gals" performed here by Hopkins. Most of the videos I've seen are an instrumental banjo tune, which is quite lovely. Here's one of the best versions I've seen, performed by Bfeito.

Download and listen to Al Hopkins and his Buckle Busters - "West Virginia Gals"
Posted by Alexander at 10:12 PM