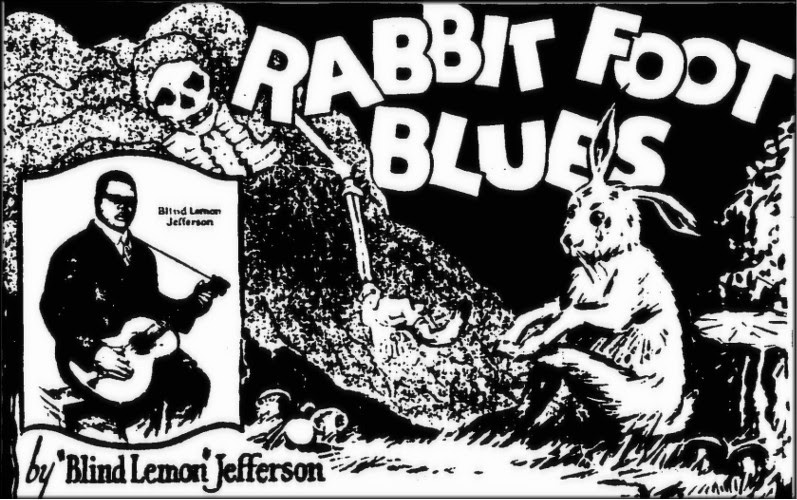 Born near Coutchman, Texas on September 24, 1893, Lemon Jefferson was the son of Alex and Clarissa Jefferson. He was one of eight children born to the couple and was born blind. His parents were sharecroppers. "Lemon" Jefferson is the only name he was known to go by. There have been reports that "Lemon" was a family nickname that referred to his light skin color, but there is no evidence that he had any other first name. Jefferson took up the guitar in his teens and began playing for picnics and parties. He became a street musician, one of the few careers open to the visually impaired during the early 20th century.

By the 1910s, Jefferson was making frequent trips to Dallas where he became involved in the burgeoning blues scene in the Deep Ellum district. Huddie "Lead Belly" Ledbetter (who appears on the fourth volume of the Anthology) later claimed that he met Jefferson during this period and played with him. Given Lead Belly's penchant for self-mythologizing, it is difficult to know whether or not this is true.

There are also reports that during his early years, Jefferson supported himself by working as professional wrestler.

By 1917, Jefferson had moved to Deep Ellum where he met Aaron Thibeaux "T-Bone" Walker. Jefferson instructed Walker in blues guitar in exchange for Walker's services as a guide (Lead Belly also claimed to have worked as a guide for Jefferson). By the early 20s, Jefferson was reportedly earning enough money as a musician to support himself.

In late 1925 or early 1926, Jefferson was discovered by Paramount Records and brought to Chicago to record. His first releases were religious songs released under the pseudonym Deacon L. J. Bates. His first blues releases were smash hits and Jefferson became the first successful blues artist to record with just guitar and voice, a paradigm that quickly became standard for blues releases.

Between 1926 and 1929, Jefferson recorded 100 tracks, 43 of which were issued (all but one on Paramount). As was usual for Paramount, the sound quality was extremely poor, and even though most of Jefferson's records were made in professional studios, most of them sound like field recordings. Jefferson, along with Blind Blake and Ma Rainey, was primarily responsible for Paramount's dominance as a blues label.

"Rabbits Foot Blues" was recorded in December of 1926, during Jefferson's first flush of fame. Reportedly, Jefferson became successful enough to buy a car and hire a driver. There are conflicting reports of his life during this period. There are claims that Jefferson was a "sloppy drunk." A neighbor of Jefferson's in Chicago reports, however, that he was "warm and cordial." Singer Rube Lacy reported that Jefferson refused to perform on Sundays, no matter how much money was offered.

In 1927, upset by the royalties he was receiving from Paramount, Jefferson briefly switched to the Okeh label, recording only one record ("Matchbox Blues" b/w "Black Snake Moan"). Contractual obligations quickly brought him back to Paramount.

Jefferson died in mid-December of 1929. His death remains something of a mystery. He reportedly died on the streets of Chicago. There have been claims that Jefferson had been poisoned by a jealous husband. Most scholars believe, however, that Jefferson died of a heart attack after getting lost during a snowstorm. Other accounts have Jefferson freezing to death on the street. Jefferson was buried in an unmarked grave in the Wortham Negro Cemetery in his native Texas.

Jefferson exerted a greater influence on future generations of musicians as a songwriter. Many of his songs have been covered by artists ranging from Bob Dylan and the Grateful Dead to B.B. King and Counting Crows. Jefferson's most covered song, "See That My Grave Is Kept Clean," appears on later on this volume.

Modern listeners might have a little difficulty understanding just why Jefferson was so incredibly popular among audiences in his day. This is primarily because, although his records sold very well, Jefferson did not exert much influence on the blues musicians that followed him. His style is quite different from the Delta blues musicians of the same period, and it was the Delta blues musicians who informed the direction of the electrified blues that emerged in Chicago following World War II. Jefferson's guitar is less rhythmic than his Delta contemporaries. In addition, Jefferson would finish each line with what Smith in his notes calls "short independent melodic guitar phrases." The effect is quite beautiful, but probably more lyrical than what most modern listeners recognize as "the blues."

"Rabbit Foot Blues" does feature a rabbit that is "run one solid mile" by the blues which "jump" it, but it does not actually mention a rabbit's foot. The floating verses then go into a description of eating lunch consisting of "a Uneeda biscuit and a half a pint of gin" and demanding that the woman the speaker is lunching with tell him about the "meatless and wheatless days." Later in the song, the speaker declares that he has an airplane and is going to get a submarine, both of which he will employ to get the Kaiser (Smith's notes point out that the World War I reference in this song was "unusual" by 1926). The song ends with a masochistic demand from the speaker that his woman "hitch [him] to [her] buggy and drive [him] like a mule," which seems to fit in with the rather negative relationships depicted in the songs that precede "Rabbit Foot Blues" on this set.

Rabbit's feet, as a good luck charm, appear in folklore all over the world. Rabbits are often associated with trickster gods and, in some Western folklore, with witches. Jefferson would likely have been familiar with the rabbit's foot charm from local hoodoo folklore. According to some accounts, a rabbit's foot is not truly lucky unless it is taken from a rabbit at midnight, in a cemetery, during either a full moon or (in some versions) a new moon. Some versions have the rabbit killed with a silver bullet, while others say that the rabbit must be alive when the foot is taken. Some versions even state that the rabbit providing the foot must be a witch in rabbit form! The sheet music cover to "Rabbit Foot Blues," seen above, certainly raises sinister and supernatural connotations that aren't really there in the song.

This is the first of three tracks by Jefferson that appear on the Anthology.