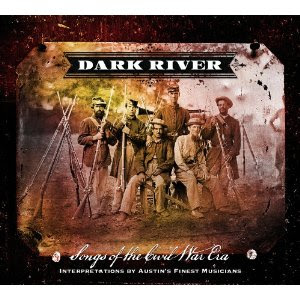 Before I begin this review, a moment of full disclosure: Chuck Pinnell, guitarist and producer of Dark River is my aunt Suzi's ex-husband and the father of my cousin, René Pinnell (who is a big wheel in the computer world. Look for his apps Hurricane Party and Forecast. Yes, I know...I know. My family is disgustingly accomplished. One day maybe I'll join them. Sigh...). What is the point? The point is twofold: One, yes I was asked by Chuck to check out this CD and was sent a review copy. Two, my relationship to Chuck and Suzi has absolutely no bearing on my opinion of the music. If I think it sucks, I will say so. As it happens, I don't think it sucks...
Nevertheless, I can easily see how one might question my objectivity in this review and think that I'm just using my blog to shill for family, however much I might protest that this isn't the case. Having said all of that, let's get to the music...

Dark River: Songs of the Civil War Era was conceived by producer Chuck Pinell, an Austin based guitarist and composer. According to his liner notes, Chuck came up with the idea for Dark River while working with fellow musician Slaid Cleaves on a film project. Chuck recruited a number of extraordinarily talented musicians to provide interpretations of songs ranging from Stephan Foster's "Hard Times" to the Irish ballad "Johnny Has Gone For A Soldier." The result is an eclectic slice of Americana; bracing as a double shot of bourbon and refreshing as a drink from a cool mountain spring.

The album kicks off, appropriately, with a rollicking version of "Shiloh" or "The Secesh". The alternate title takes its name from the secessionists of central Tennessee who lined up to fight for the Confederacy following the 1862 Battle of Shiloh. The battle was one of the bloodiest of the war: 10,700 Confederates were killed or wounded for no gain whatsoever, while the Union squeaked out a narrow victory at a cost of 13,000 killed or wounded.

"Shiloh" is performed here by fiddler Warren Hood and mandolinist Rich Brotherton. Hood's youthful voice perfectly matches that of the speaker, a brash young man bravely striding into battle following one of the Confederacy's heaviest losses. Instrumentally, the performance is pitch perfect and beautifully recorded. It is an auspicious beginning.

The rest of the album does not disappoint. Each track is unique, providing an original take on some very familiar melodies and featuring magnificent performances. The fact that several musicians show up throughout the album providing instrumental support keeps the album from feeling like a patchwork affair, a hazard of multiple-artist projects. Some highlights:

Drew Nelson's weary reading of "Hard Times", featuring a lovely harmony vocal from Tina Mitchell Wilkins; Rebecca Folsom and Celeste Krenz's angelic performance of the spiritual "Swing Low" (a song I've had particular affection for ever since my mother sang it to me as a lullaby when I was little); two lovely Irish songs performed back to back (in memory of the many Irish lads who were recruited into the Union army, some directly off the boat): Slaid Cleaves gives us a haunting and haunted rendition of "She Moved Through The Fair" while Erin Ivey keens a heartrending lament for her lost love on "Johnny Has Gone For a Soldier", an American version of the traditional "Siúil a Rúin" (with the chorus beautifully sung in Gaelic).

The album features some wonderful instrumentals that really highlight the tightness of this group of musicians: Producer Pinnell's fine reading of "The Last Rose of Summer," Rich Brotherton's version of "The Yellow Rose of Texas" and Jeff Plankenhorn, whose lovely dobro enlivens his version of "Home Sweet Home" (a song which also appeared on the Anthology ).

I would be remiss if I did not mention my own dear aunt, Suzi Stern. It was Suzi who hipped Chuck to Where Dead Voices Gather and suggested that he might contact me for a review. Suzi is also the artist on Dark River with whom I am most familiar (we lived in the same house for the first several years of my life, for cryin' out loud). So I may, again, sound biased when I say that Suzi's contribution to Dark River is a stand-out. Suzi performs a version of the minstrel show standard "Oh! Susanna" that makes the hair on your arms stand on end. While most of artists on Dark River are solidly within the bounds of folk, country, and traditional music, Suzi is a jazz musician. Her arrangement of "Oh! Susanna", which features her piano playing as well as her vocal, perfectly blends modern jazz with American Folk Music (and there is an argument to be made that jazz is as much a "folk" music as blues, but that's another post). Leah Zeger's fiddle provides a gentle counterpoint to the rubato piano line laid down by Suzi, while Chuck plunks a mean banjo, in addition to his contribution as a guitarist. Suzi holds off on the familiar "don't you cry for me" chorus, creating a tension that builds throughout the performance. It is, truly, a highlight on an album of highlights.

I don't mean to slight any of the other performances from artists like Jimmy LaFave, Jon Dee Graham, Eliza Gilkyson, James McMurtry, and Rita Hosking, all of whom are wonderful and enliven their contributions with their own unique styles. There's just too much great music to go into detail about each track. I heartily recommend Dark River: Songs of the Civil War Era to all lovers of American music, past and present.

I would like to take this opportunity to thank Chuck for his patience. He sent me a copy of Dark River many months ago (over the summer, in fact). I like to live with an album for a while, and listen to it interspersed with other albums, before I attempt to review it. This is probably the reason I will never be a professional music critic, but I think it allows me to do justice to the music. Thanks to Chuck and to all of the artists who made this wonderful album possible...