"See That My Grave Is Kept Clean" - Blind Lemon Jefferson 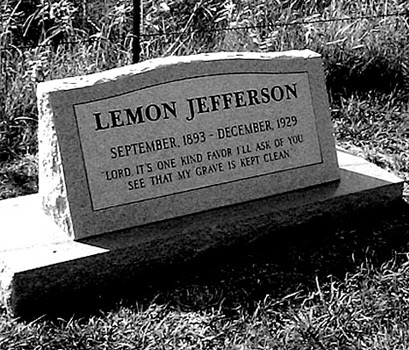 Possibly the grimmest track on the Anthology, "See That My Grave Is Kept Clean" is a set of detailed burial instructions.


Recorded a little over a year before Jefferson's death at his last recording session, "See That My Grave Is Kept Clean" is arguably Jefferson's masterpiece and is unquestionably his greatest contribution to the blues canon.

The first track since "Poor Boy Blues" to stray from the theme of the prison, "See That My Grave Is Kept Clean" is the epitome of a thread that runs through all three volumes of the Anthology. From the very first disc, many songs have dealt with the subject of death and several have featured instructions on the disposal of the body after death. Other songs that have included burial instructions or have referred to burial or internment are "Henry Lee," "Fatal Flower Garden," "The Butcher's Boy," "Old Dog Blue," "Le Vieux Soulard Et Sa Femme," and "Country Blues." None of these songs, however, are as detailed as "See That My Grave Is Kept Clean." Jefferson not only describes the manner in which he wants to be buried (grave dug with a silver spade, casket lowered with a golden chain), but also refers to the sound of the coffin being nailed shut and the death knell. The entire song is a memento mori, a reminder that we are all mortal and that death awaits us.

While such thoughts seem grim or morbid by today's standards (and edge dangerously close to Greil Marcus's fanciful interpretation of the Anthology as a wealth of the strange and uncanny), it should be remembered that in ages past death was far more commonplace. Before the advent of inoculation against such diseases as smallpox and polio, most individuals had experienced at least one death in their immediate family and likely many more in their circle of friends, acquaintances and neighbors. Once upon a time, graveyards with located right outside the local church and were a common sight on a daily basis. When Jefferson asks the listener if he's ever heard a coffin sound or a church-bell toll, it's a largely rhetorical question. Most people in Jefferson's audience would have indeed heard such things, and quite often, too. Death was a household figure, and its familiarity would have bred a relatively resigned attitude to it.

Here's the king of New York City cool, Lou Reed hisself, performing a feedback drenched version of "See That My Grave Is Kept Clean" from The Harry Smith Project.

Here's B.B. King performing a modern take on "See That My Grave Is Kept Clean."

Here's a version by Peter, Paul, and Mary (with Japanese subtitles).

This is a version performed by Mavis Staples...

Download and listen to Blind Lemon Jefferson - "See That My Grave Is Kept Clean"
Posted by Alexander at 1:23 AM