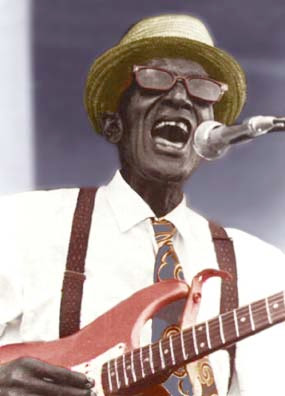 For biographical information on "Sleepy" John Estes and Yank Rachel, see the entry for "Expressman Blues."

John Estes and Yank Rachel return with this ribald song of adultery, drunkenness and disease.

Now, asks sweet mama,
Lemme be her kid.
She says, "I might get boogied
Like to keep it hid."

Well, she looked at me,
She begin to smile.
Says, "I thought I would use you
For my man a while."

Now, went upstairs
To pack my leavin' trunk.
I never saw no whiskey.
The blues done made me sloppy drunk.

Now some said, disease
Some said it was [unintelligible]
But it's the slow consumption
Killin' you by degrees.

"Milk Cow Blues" was recorded four days before the version of "Expressman Blues" that appears on volume three of the Anthology and features the same instrumental line-up (Estes on guitar, Rachel on mandolin and vocal, and Jab Jones on piano). The song has nothing whatever to do with its title, instead it concerns a man having an affair with a married woman (becoming her "kid" or "kid man"). The speaker declares that, not having imbibed any whiskey, it is "the blues" that have made him "sloppy drunk" (a dubious claim, to say the least). In the last verse, the speaker addresses someone whose identity is unclear (it could be the woman from the first verse, although in that verse the woman is addressed as "she." In this verse, the speaker addresses a "you"). The speaker declares that a "slow consumption" is killing the addressee "by degrees." Consumption, of course, was another name for tuberculosis, an infectious disease that often affects the lungs, although it can affect other body parts including the spine. Notable victims of tuberculosis include Franz Kafka, George Orwell, Vivian Leigh, Charles Bukowski, Dashiell Hammett, Maxim Gorkey, Albert Camus, and - of course - Jimmie Rodgers.

This song is unrelated to the Kokomo Arnold song by the same title. It was the Arnold song that Elvis Presley famously covered during his Sun Sessions.

"Milk Cow Blues" has been covered by Taj Mahal as well as the Derek Trucks Band.

This is the third track in a row of four that feature artists who appeared on the original three-volume Anthology.

This is a clip of the Kinks performing a song called "Milk Cow Blues" that has nothing to do with Estes and Rachel's song OR the Kokomo Arnold song. Nevertheless, it rocks and its worth seeing. This performance features Dave Davies on lead vocal.