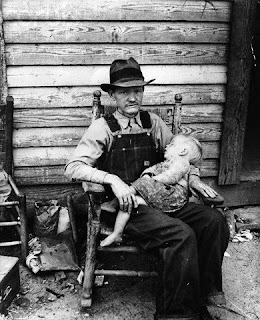 The Four Aces were a Cajun group that began, in 1934, as a backing band for fiddler and Cajun music pioneer, Leo Soileau. The group originally consisted of Floyd Shreve and Dewey Landry on guitars and Tony Gonzales on bass and drums. Gonzales became the first drummer to appear on a Cajun recording when he performed on the Aces' debut session for Bluebird. The group moved to Decca the following year. After Soileau's departure in the late '30s, Floyd Shreve, who also recorded and performed with the Hackberry Ramblers, took over the group. Replacing Soileau on fiddle was Boyce Jones.

Unfortunately, as of this writing, no biographical information (including birth and death dates) was available on Shreve, Landry, Gonzales, or Jones. If anybody has any such information, please e-mail me at wheredeadvoicesgather1@gmail.com or leave a comment.

"Aces' Breakdown" is the second of only two instrumental pieces on this volume of the Anthology. It was recorded in a makeshift studio at the St. Charles Hotel in New Orleans on April 2, 1938. A little over six months later, Floyd Shreve would return to the St. Charles Hotel, this time with the Hackberry Ramblers, to record "Dans Le Grand Bois." Like the previous selection, "Aces' Breakdown" is a hybrid of Cajun music and traditional country and string band music. It demonstrates the cross-pollination of styles that occurred between Louisiana and Texas.

The recording is spirited and would fit comfortably on the "Social Music" volume of the Anthology. Members of the Four Aces can be heard whooping and shouting throughout the record. The song itself is a medley of fiddle tunes, including the polka "Flop Eared Mule." The group is joined by a pianist on this recording, believed to be Robert Thibodeaux, who made his own recordings at the same session.

"Aces' Breakdown" is the second recording on the Anthology to include a drum. It is difficult to know whether this was intentional on Smith's part, but it seems fitting that he closes the Anthology with the appearance of an instrument that would come to define American music during the post-war era. Virtually all genres of American music today, including country, feature drums.

With this selection, we complete not only the "Lost" Volume of the Anthology, but the Anthology itself. In our next and final entry, we will look back at the Anthology and try to examine what we have learned.

Here's a clip from the film The Big Easy (1987) that features Cajun dancing...


Download and listen to The Four Aces - "Aces' Breakdown"
Posted by Alexander at 3:56 PM