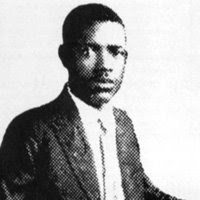 Walter E. Lewis was born in Greenwood, Mississippi on March 6, 1893. His family moved to Memphis, Tennessee when he was seven years old. He acquired the nickname "Furry" as a child, but by the time of his rediscovery in the 1950s, he could no longer remember how or why. By the age of fifteen, Lewis was performing at parties and as a street musician. He also performed with W.C. Handy's Orchestra. He lost a leg in a 1917 railroad accident and became a professional musician in order to earn a living. He performed with medicine shows and with jug bands, including those led by Will Shade and Gus Cannon, both of whom appear on the Anthology. In 1922, tired of traveling, Lewis took a job as a Memphis street sweeper, a job he held until his retirement in 1966. Nevertheless, Lewis remained active in the Memphis music scene.

In 1927, Lewis traveled to Chicago to record for the Vocalion label. A year later, he recorded several sides for Victor, including the two-part "Kassie Jones," a variation of "Casey Jones" (the name was deliberately misspelled to avoid a copyright violation).

Following the release of the Anthology in 1952, Lewis was rediscovered and launched upon a second career. Highlights include opening for the Rolling Stones (twice), appearing on the Tonight Show, acting in a Burt Reynolds film (1975's W.W. and the Dixie Dancekings), and being profiled in Playboy magazine. Lewis was also the subject of Joni Mitchell's song, "Furry Sings The Blues," from her 1976 Hejira album. The song was based on Mitchell's meeting Lewis in a Memphis boarding house. Lewis hated the song and demanded that Mitchell pay him royalties for the use of his name.

Furry Lewis died on September 14, 1981. He is buried in the Hollywood Cemetery in South Memphis. His grave is marked by two stones, the second of which was purchased by fans.

John Luther "Casey" Jones was a railroad engineer who worked on the Illinois Central Railroad. He was killed on April 30, 1900 when the passenger train he was driving collided with a stalled freight train at Vaughn, Mississippi.

The south-bound passenger train No. 1 was running under a full head of steam when it crashed into the rear end of a caboose and three freight cars which were standing on the main track, the other portion of the train being on a sidetrack. The caboose and two of the cars were smashed to pieces, the engine left the rails and plowed into an embankment, where it overturned and was completely wrecked, the baggage and mail coaches also being thrown from the track and badly damaged. The engineer was killed outright by the concussion. His body was found lying under the cab, with his skull crushed and right arm torn from its socket. The fireman jumped just in time to save his life. The express messenger was thrown against the side of the car, having two of his ribs broken by the blow, but his condition is not considered dangerous. - From a Jackson, Mississippi newspaper account of the accident.

Jones was hailed as a hero for his self-sacrifice and for the fact that he prevented any further fatalities by managing to slow his train in time.

The ballad commemorating Jones's death was reportedly written only days afterward by Wallace Saunders, a black railroad worker and a friend of Jones. The song has been recorded numerous times and in numerous variations. The story has also inspired other unrelated songs, such as the song "Casey Jones" by the Grateful Dead.

There was a woman name Miss Alice Fry.
Said, "I'm gonna ride with Mister Casey 'fore I die.
I ain't good looking but I take my time.
A rambling woman with a rambling mind.
Got a rambling mind."

Mister Casey said, before he died,
One more road that he wants to ride.
People tells Casey, "Which road is he?"
"The Southern Pacific and the Santa Fe.
Santa Fe."

Tuesday mornin', it looked like rain.
Around the curve came a passenger train.
Under the boiler lay Mister Casey Jones.
Good old engineer, but he's dead and gone.
Dead and gone.


Lewis's version of this song is curious for a number of reasons. For one thing, the viewpoint character of the song is apparently unconnected to the events surrounding the death of Casey Jones. Not only is the speaker unconnected to Jones and his death, he also appears entirely unconcerned. The song alternates between snapshots of Jones in his engine or of Jones's family with completely unrelated material, such as the revelation that "Memphis women don't wear no shoes." The speaker also declares himself a "natural born Eastman" a number of times (one assumes that Lewis means that the speaker - like himself - was born in the eastern United States. Although why this should mean that he "don't have to work" is unclear), which has no clear connection to the story of Casey Jones. In fact, the most significant event in Jones's story - his death - happens "off stage" in Lewis's song. We only hear of Jones's death in the second part of the song from one of Jones's children. This rambling narrative, peppered as it is with non sequiturs, and sung in a laconic tone contrasts sharply with the moralizing tone of "Engine One-Forty-Three." Unlike that train-disaster song, there is no moral to the death of Casey Jones. But while the song omits a moral, it also makes no mention of Jones's heroism. It is much closer, then, in spirit to "When That Great Ship Went Down", suggesting that blacks felt that these tragedies were not THEIR tragedies (unlike the death of John Henry or the crimes of Stackalee and Frankie).

"Kassie Jones" contains lyrical connections to several other ballads heard as part of this collection. Mrs. Jones's callous comment to her children that they will "draw another pension from [their] father's death" echoes a similar line in "White House Blues." There is also the curious appearance of Alice Fry from "Frankie."

The line "Mister Casey said, before he died / One more road that he wants to ride" is similar to a line from "The Rock Island Line":

Well, the engineer said, before he died
There's two more drinks that he'd like to try.
Conductor said, "What can they be?"
A hot cup of coffee and a cold glass of tea.

"Kassie Jones" is the last of three songs in a row dealing with man-made or transportation related disasters. The last three songs on the "Ballads" set deal with natural disasters and the hard times of farmers.

The Shameless Plug Department: Rise of the Machines: Check out the long awaited(?) fourth episode of the "Where Dead Voices Gather" podcast. On this all-blues episode, you'll hear New Year's greetings from Lightin' Hopkins and Mary Harris, as well as Delta Blues by Son House, Willie Brown and Charlie Patton. You'll also hear recordings by more obscure figures like Geeshie Wiley, Blind Joe Reynolds, William Harris, and more. Also available on iTunes! Subscribe today so you don't miss a single episode. It's free and it doesn't hurt. Who can ask for more?

Here's Furry Lewis himself in 1968 performing "Kassie Jones" in a television appearance.


Download and listen to Furry Lewis - "Kassie Jones"
Posted by Alexander at 12:36 PM