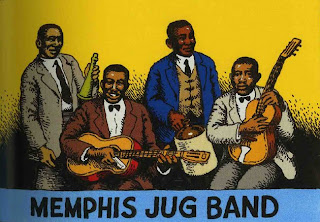 Set Four: The "Lost" Volume; Disc One; Track One: "Memphis Shakedown" performed by The Memphis Jug Band. Recorded in Chicago on November 8, 1934.

For the better part of a half-century, the three volume Anthology was the last word on Harry Smith's excursion into American Folk Music. Following the Anthology's release, Smith pursued his interests in a number of other directions, including painting, filmmaking, collecting string figures, and producing the first album by the Fugs. The Anthology, however, was the work for which Smith was best known. In 1968, Smith was interviewed by John Cohen and the interview dealt extensively with the Anthology.

As was mentioned in our last entry, Smith was honored with a Grammy award for the Anthology shortly before his death in 1991. Six years later, Smithsonian-Folkways released the Anthology on CD, making it generally available for the first time in many years.

Nevertheless, the Anthology was a work firmly rooted in the past. Listeners could only imagine what subsequent volumes might have sounded like.

The notes for the original Anthology promised that three more volumes were forthcoming which would deal with "examples of rhythm changes between 1890 and 1950." In his 1968 interview with John Cohen, Smith stated that there had been a fourth volume prepared for release along with the first three, but that editorial differences had lead to the project being scrapped.

According to Dick Spottswood, Smith circulated a tape copy of the proposed fourth volume which was eventually released on CD in 2000 on John Fahey's Revenant record label. Presented as a hardcover book, the two-disc set contained (in addition to the music itself) essays by Ed Sanders of the Fugs, Dick Spottswood, Greil Marcus (who had written about the Anthology in his book Invisible Republic, later re-released as The Old, Weird America, and was now treated as a foremost authority on Smith) and John Fahey, as well as excerpts from Cohen's 1968 interview with Smith. The book also included Dick Spottswood's notes for each track.

It is worth noting that Spottswood leaves out discographical information that had been included by Smith in the booklet for the first three volumes. For that reason, while we have the personnel and recording date and location for each track, we don't have the original record label or the catalog numbers. When I have that information, I will include it. When I do not (as with this selection), I will provide the information from the booklet.

The question that immediately presents itself is: What is this set about? As we saw in the previous entries, the first three sets were organized by theme ("Ballads," "Social Music" (secular and religious), and "Songs"). This volume includes examples of all three categories. The overarching theme, in my opinion, is that while all of the previous volumes looked backwards to styles and events that predated the lives of the performers, this volume deals with (what was for the performers) the here and now. In this volume, we were hear topical songs.; References to the political and social realities that faced these artists. We will also hear styles of music that reflect the increasing influence of jazz, bluegrass, and the blues.

For biographical information on Will Shade and the Memphis Jug Band, see the entry for "Bob Lee Junior Blues."

"Memphis Shakedown" is an almost entirely instrumental performance. Had this song appeared on the original Anthology, it would have been placed on the first disc of the "Social Music" volume. In his notes, Spottswood points out that the title of the song indicates that the song is a "combines the idea of the hillbilly breakdown with the African American shake or shimmy-shake." It is significant that Smith began this volume, a volume that looks to music's present and future rather than at its past, with a number that defies the genre conventions of the day. This number is a deliberate mixing of white and black styles, a mixture that in two more decades would lead to the birth of rock and roll.

Indeed, the Memphis Jug Band (in their last recording session before a lengthy hiatus brought on by the Depression) rocks on this number. There are no lyrics, but there is quite a bit of shouting and scat singing throughout, provided by guitarists Will Shade and Charlie Burse. The most prominent instrumental presence on this recording is fiddler Charlie Pierce in one of his very few recordings. Pierce saws at the strings, giving the number a down home feel that contrasts sharply with the jazz rhythms performed by Shade and Burse on the guitars, along with Robert Burse on the washboard, and Jab Jones on the jug. Given how opposed much of the Anthology's original audience was to the R&B and rock and roll that emerged during the '50s, it is possible that Smith left this number off of this original set on purpose. Its transgressive mix of white and black styles, so reminiscent of music that would be made by Elvis Presley, Buddy Holly, Chuck Berry, and Little Richard some twenty-odd years later, might have sat badly with the purist folk audience that embraced the Anthology in the first few years following its release. Of course, the Anthology predates rock and roll by several years. Nevertheless, the seeds of rock and roll were already planted and starting to blossom in the early '50s.

It is also significant, in hindsight, that Memphis (the likely location of this recording and home of the Memphis Jug Band) would be the home of Sun Records beginning in 1952, and that it was at Sun that Sam Philips, Elvis Presley, Bill Black, and Scotty Moore would, in 1954, mix the potent elements of white and black music, resulting in the genre-busting version of "That's Alright, Mama" that would kick-start Elvis's recording career and bring rock and roll into the mainstream.


The Shameless Plug Department: It's been a long time since I've done a podcast episode of "Where Dead Voices Gather." This is partly due to my busy work schedule and partly due to the fact that I now put together a two-hour weekly radio show in my spare time. I do have plans for a seventh episode of "Where Dead Voices Gather," which I hope to put together in the next week or so. In the meantime, you can still listen to the old episodes.

Here's the Carolina Chocolate Drops rocking a version of "Memphis Shakedown" on the kazoo...