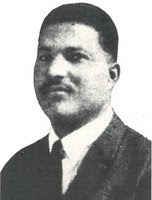 Ford Washington McGee was born in Winchester, Tennessee on October 5, 1890 and was raised in Hillsboro, Texas. Married at 20, McGee embarked on a teaching career in Oklahoma. In 1918, he joined Rev. Charles H. Mason's Memphis-based Church of God in Christ and had completely abandoned teaching in favor of preaching by 1920, leading revival meetings in Kansas and Iowa. He built a congregation in Oklahoma City with the help of blind singer/pianist Arizona Dranes. By 1925, McGee had established congregations in Chicago.

In 1926, Arizona Dranes made her first recordings for Okeh Records. Needing backup singers for the date, she recruited McGee and his Jubilee Singers. The following year, McGee (mistakenly credited as "F.N. McGee") made his debut recordings as a leader, recording both songs and sermons. A few months later, McGee switched to Victor where he recorded several big selling records (one title selling an estimated 100,000 copies). With his increasing fame as a recording artist, McGee's congregation grew and he was able to build his own church in Chicago. With the coming of the Depression, McGee's recording career was cut short, his last recording date being held in New York City on June 16, 1930. It was at this session that he recorded "Fifty Miles of Elbow Room."

His recording career behind him, McGee concentrated on his preaching and remained an active member of his church communities in both Chicago and New York until his death in 1971.

"Fifty Miles of Elbow Room" is a song that makes lavish promises about the world to come.

Twelve hundred miles its length and breadth,
The four-square city stands.
Its gem-set walls of jasper shine
Not made with human hands.
One hundred miles its gates are wide.
Abundant entrance there.
With fifty miles of elbow room
On either side to spare.

A sinner saved by grace may leave
His trunks of inner shame,
Upon the ship his [unintelligible]
By faith in Jesus name.
Well, [unintelligible]
Into the city fair.
With fifty miles of elbow room
On either side to spare.

"Fifty Miles of Elbow Room" is based on the description of the New Jerusalem in the Book of Revelation. It describes a lavish city, "twelve hundred miles" in "length and breadth," with "gem set walls of jasper." More important than the material glory of the heavily kingdom is the fact that it contains room enough for everybody, promising "fifty miles of elbow room" on either side.

It has long been a practice of religion to promise a better life after death. It prevents those people who lack material comforts (and even basic necessities) from demanding fair treatment in this life.

Like Ernest Phipps' "Shine On Me," "Fifty Miles of Elbow Room" is a raucous celebration of faith. Beginning with a march-time piano and the jazzy blast of a trumpet (reportedly played by Henry "Red" Allen), the song bursts forth with voices and hand claps. Rev. McGee (joined by an anonymous female voice on the verses) leads his congregation in joyful polyphony.

"Fifty Miles of Elbow Room" is the second of three tracks in a row that feature group singing with large instrumental accompaniment. It is the second to last track on the "Social Music" volume of the Anthology.

The Shameless Plug Department: The fifth episode of the "Where Dead Voices Gather" podcast is finally up! It's an all jazz episode featuring early jazz recordings by the Original Dixieland Jass Band, Jelly Roll Morton, Louis Armstrong, Bessie Smith, and a whole lot more! Also available on iTunes! Subscribe today so you don't miss a single episode. It's free and it doesn't hurt. Who can ask for more?

This is a beautiful rendition of "Fifty Miles of Elbow Room" (clearly inspired by the Carter Family version) performed on autoharp.