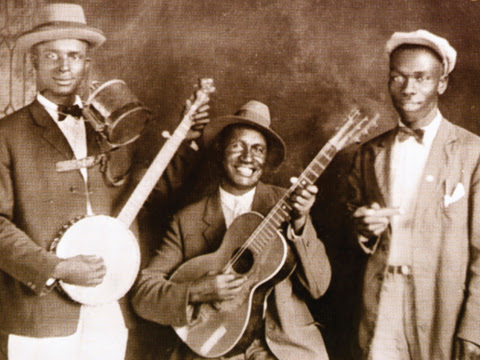 Cannon's Jug Stompers was a Memphis based jug band. For more information on the jug as a musical instrument, see the entry for "Newport Blues" by the Cincinnati Jug Band.

Cannon's Jug Stompers was initially formed in response to the success of Will Shade's Memphis Jug Band, which appears later on this disc. "Minglewood Blues" was recorded at the Jug Stomper's first recording session in January of 1928.

The Jug Stompers consisted of Gus Cannon on banjo and jug, Ashley Thompson on guitar, and Noah Lewis on harmonica.

Gus Cannon was born on September 12, 1883 in Red Banks, Mississippi, but was largely raised in Clarksdale. Cannon was an entirely self-taught musician, teaching himself on a banjo that he made out of a raccoon skin stretched across as frying pan. He was greatly influenced by two members of W.C. Handy's group, which was based in Clarksdale at the time. Fiddle player Jim Turner inspired Cannon to learn the fiddle, while guitarist Alex Lee taught Cannon the blues song "Poor Boy Long Way From Home" (which appears later on the "Songs" set as "Poor Boy Blues"), teaching Cannon to use a knife as a slide. Cannon picked up the slide technique, utilizing it in his banjo playing.

Cannon moved to Memphis around 1907, where he met and began performing with Jim Jackson. Around this time, he met Noah Lewis and Ashley Thompson, both of whom would later become members of Cannon's Jug Stompers. They would form their first band in 1914, playing at parties and dances. Cannon made his first recordings for Paramount Records in 1927, credited as "Banjo Joe" and performing with Blind Blake. The following year, he made his first recordings with the newly formed Jug Stompers. Not long after, a fourth member of the group, Hosea Woods, was added contributing guitar, banjo, kazoo, and vocals.

The Jug Stompers became one of Memphis's most popular jug bands during the 1930s. Among the songs recorded by the group were "Viola Lee Blues," "Big Railroad Blues," and "Walk Right In." Cannon also appeared in the 1929 King Vidor film Hallelujah!

Following the release of the Anthology, Cannon was rediscovered. He made records for Folkways and performed at colleges and coffee houses. His song "Walk Right In" was successfully covered by the Rooftop Singers. Cannon sued for royalties and was able to live out the rest of his life in relative comfort. In 1963, he recorded an album for Stax Records in the company of Will Shade, Sam Lindsay, and Milton Roby.

Harmonica player Noah Lewis, the composer of "Minglewood Blues," was born on September 3, 1895 in Henning, Tennessee. He was best known for his trick of playing two harmonicas simultaneously, one with his mouth and the other with his nose (which calls to mind a similar trick in which reed player Rahsaan Roland Kirk would play the flute with his nose). Although Lewis was best known for his work with Cannon, he did form his own jug band in 1930 with Sleepy John Estes and Yank Rachel (both of whom appear later on the "Songs" volume, performing "Expressman Blues"). The Noah Lewis Jug Band recorded a revised version of "Minglewood Blues," with new lyrics, under the title "New Minglewood Blues." It was this version of the song which was covered by the Grateful Dead on their first album as "New New Minglewood Blues."

Lewis died on February 7, 1961 of gangrene brought on by frostbite.

Little is known about Ashley Thompson, who plays guitar and sings lead vocal on this recording. His birth and death dates, along with the details of his life outside of his association with Cannon, are completely unknown.

"Minglewood Blues" both a cautionary song and a boast. The speaker warns men against "let[ting] one woman rule [their] mind[s]," stating that she will "keep you worried, troubled all the time." The speaker then boasts of his sexual conquests, particularly with married women. Lewis's lyrics go into greater detail in his "New Minglewood Blues," in which he claims that "stealin' women from their monkey men" is his "number one occupation":

Minglewood was a lumber camp near the Mississippi. As with many labor camps and plantations, Minglewood hired musicians to perform at parties and danced on the weekends. Noah Lewis was hired to perform at Minglewood and reportedly wrote this song afterward.

In his notes, Smith points out that Thompson's vocal style, which consists of a "buzzing vibrato and relatively small intervals" is typical of Memphis singers. Smith made a similar observation in his notes to "He Got Better Things For You."

The notes to "Minglewood Blues" contain an uncharacteristic error on Smith's part. The name of the artist is curiously omitted from its customary place immediately under the song title.

"Minglewood Blues" is the first track on the "Songs" volume to feature African American musicians, and the first since "Newport Blues" to feature a jug band. It is the second song in a row to deal with heartache related to women.

It has been brought to my attention that a documentary film on Gus Cannon has been recently released titled Chasin' Gus's Ghost. It looks intriguing to say the least. Thanks to Hans Eichinger for hipping me to this film...

The Shameless Plug Department: The fifth episode of the "Where Dead Voices Gather" podcast is finally up! It's an all jazz episode featuring early jazz recordings by the Original Dixieland Jass Band, Jelly Roll Morton, Louis Armstrong, Bessie Smith, and a whole lot more! Also available on iTunes! Subscribe today so you don't miss a single episode. It's free and it doesn't hurt. Who can ask for more?

Here is a version of "Minglewood Blues" performed by the Old Crow Medicine Show in a live appearance at the late lamented Tower Records.

Here is a version of "New Minglewood Blues" performed by the Grateful Dead in 1994.