"I Wish I Was A Mole In The Ground" - Bascom Lamar Lunsford, "The Minstrel of the Appalachians" 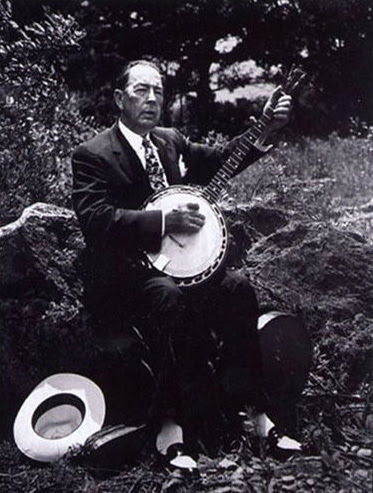 Set Three: Songs; Disc One; Track Seven: "I Wish I Was A Mole In The Ground" perfor1med by Bascom Lamar Lunsford, "The Minstrel of the Appalachians". "Vocal solo with 5-string banjo." Recorded in Ashland, Kentucky on April, 1928. Original issue Brunswick 219B(132).

For biographical information on Bascom Lamar Lunsford, see the entry for "Dry Bones."

Bascom Lamar Lunsford on "I Wish I Was A Mole In The Ground":

In contrast to Lunsford's statement that the "bend" in the song refers to "the bend in the Pigeon River," Smith's notes claim that it refers to "the Big Bend Penitentiary." This makes more sense, in the context of the song, than Lunsford's interpretation. However, I have been unable to find any information on such a penitentiary, or indeed to confirm that it ever existed.

Like "Sugar Baby," "I Wish I Was A Mole In The Ground" is a song that Greil Marcus makes much of. In his book, Lipstick Traces, he writes: 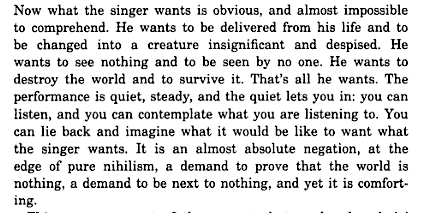 I disagree with Marcus's reading of "I Wish I Was A Mole In The Ground." Burrowing creatures, such as moles, take physical comfort from being in enclosed spaces. If you've ever had a hamster, you've probably observed it sleeping or just hanging out in those clear plastic tunnels take make up their habitats. Rather than wishing for "negation," it seems to me that the speaker in the song is wishing for the comfort of home.

This is further supported by the interpretation of "bend" (which is sometimes sung as "pen") as the Big Bend Penitentiary (where the speaker has been "so long" with "the rough and rowdy men"). After a long incarceration, it seems only natural that the speaker wishes to be someplace he feels he belongs. A mole certainly is at home in the ground.

In other versions of this song, "Kimpy" is sung as "Tempe" or "Tempy."

Mona tried to tell me
To stay away from the train line.
She said that all the railroad men
Just drink up your blood like wine.

The "railroad men" who "drink up your blood like wine" are likely not simply railroad employees (such as engineers or conductors) but rather the owners of the railroads, such as Jay Gould (1836-1892), who were known for their ruthless business practices.

Here is Matt Costa performing a version of "I Wish I Was A Mole In The Ground" on the acoustic guitar.

This is the East River String Band (with cartoonist R. Crumb on mandolin!) performing a version of the song.

Download and listen to Bascom Lamar Lunsford - "I Wish I Was A Mole In The Ground"
Posted by Alexander at 1:26 PM

Labels: banjo, bascom lamar lunsford, i wish i was a mole in the ground