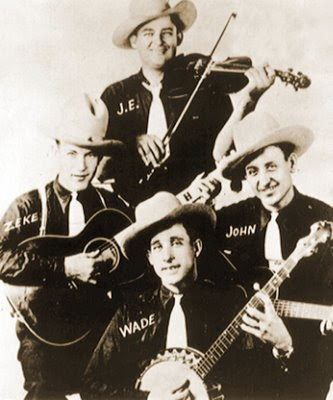 Joseph Emmett Mainer was born near Weaverville, North Carolina on July 20, 1898. His younger brother, Wade Mainer, was born on April 21, 1907.

The Mainer brothers came from a musical family and both learned music at an early age. J.E. Mainer learned banjo and fiddle, while Wade concentrated on the banjo. The Mainer Brothers played local dances. Both of them relocated to Concord, North Carolina during the early 1920s where they worked in textile mills. The brothers continued to play locally, their reputations steadily growing. In 1933, J.E. secured a gig playing on radio station WBT in Charlotte, North Carolina, performing on a show sponsored by Crazy Water Crystals. J.E. dubbed his band "J.E. Mainer and his Crazy Mountaineers." In 1934, Wade joined the band on banjo. The group was filled out by guitarist Zeke Morris and "Daddy" John Love. They made their recording debut for Bluebird records in 1935. In 1936, Wade and Zeke Morris temporarily left the group to perform as a duo, but returned in time for the recording session that yielded this version of "John Henry Was A Little Boy" under the name J.E. Mainer's Mountaineers.

In 1937, Wade left the Mountaineers to form his own group, the Sons of the Mountaineers. J.E. kept his group going with various changes in personnel until the start of World War II, when the band broke up. J.E. performed and recorded during the post-war era with his sons, Glenn and Curly. He died on June 12, 1971.

Wade Mainer disbanded the Sons of the Mountaineers during World War II, reforming the group for a 1942 performance at the White House for Franklin and Eleanor Roosevelt. After the war, Mainer continued to perform until his renewed commitment to Christianity led to his retirement from music in 1953.

Mainer relocated to Flint, Michigan where he worked in a General Motors plant. Although he had renounced the music business and quit playing the banjo, Mainer continued to sing gospel music at church and at revival meetings. During the 1960s, Mainer took up the banjo again to record religious music and to tour with his wife, who joined him on stage.

Mainer still lives in Flint, Michigan. He celebrated his 100th birthday on April 27, 2007 and performed at a concert given in honor of his 101st birthday in 2008. Mainer is the only artist featured on the Anthology who is still alive at the time of this writing.

"John Henry Was A Little Boy" is a variation of the John Henry Ballad. Smith included the Williamson Brothers and Curry's version of "Gonna Die With My Hammer In My Hand" on the second disc of the "Ballad" set. For more information on the historical John Henry and on the John Henry ballad in general, see that earlier entry.


J.E. Mainer's Mountaineers, on this recording, consisted of J.E. Mainer on fiddle, Wade Mainer on lead vocal and banjo, Zeke Morris and Beachum Blackweller on guitars and vocals.

It is most interesting to compare the Mainer Brothers' version of this song with the earlier recording by the Williamson Brothers. Both recordings are wild, performed at breakneck speed. Both recordings feature fiddle and two guitars (although the Mainer Brothers' version also features the banjo). Many of the same lyrics crop up in both recordings (although there are some variations. In the Williamson Brothers' version, John Henry's wife is named "Sally Ann." In the version by the Mainer Brothers, her name is "Polly Ann." Such variations between versions is to be expected, and is indeed an integral part of the Folk Process). While both versions purport to be ballads, neither version actually gets around to describing the race between John Henry and the Steam Drill (although the Mainers get a little closer,) and while both version have John Henry declaring that his hammer "will be the death of" him, and that he will "die with [his] hammer in [his] hands," neither version actually depicts his death.

The main differences between the two recordings (made roughly ten years apart) is stylistic. The Williamson Brothers' version points to the past; to traditional folkways. The Mainer Brothers' version points to the future. Both Mainer brothers, but especially Wade, are viewed as a bridge between the "Old Time" styles of the past, and the Bluegrass style that was to come.

"John Henry Was A Little Boy" is the third song in a row recorded in Charlotte, North Carolina, and was actually recorded the day before the Blue Sky Boys recorded their version of "Down On The Banks of the Ohio."

The Shameless Plug Department: If you've tried to listen to the Podcast lately, you have no doubt noticed that the links are dead. The reason for this is that my account has been suspended for taking too long to put up a new episode. It is with a heavy heart that I declare the Where Dead Voices Gather Podcast to be on permanent hiatus. There's just too much going on in my life to keep it up. Perhaps the Podcast will return one day.

Download and listen to J.E. Mainer's Mountaineers - "John Henry Was A Little Boy"