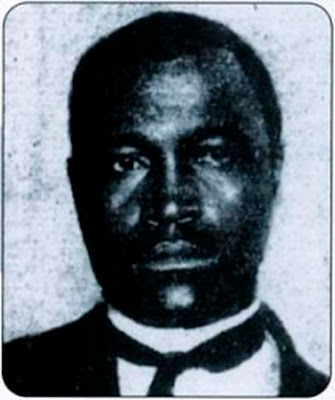 The second disc of "Social Music" is devoted entirely to recordings of religious music. It includes music performed by white and black artists, a few of whom appear elsewhere on the Anthology performing secular music. All of the music on this disc has its origins in the American south, most likely in the Pentecostal and Holiness Churches. Religious music has a long history and spans many cultures. Virtually every single human culture has included music in its particular brand of worship and expressions of faith through song are often held in high esteem. One of the most popular Psalms commands us to

Make a joyful noise unto the Lord, all ye lands.
Serve the Lord with gladness:
Come before his presence with singing.

Indeed, there are some who theorize that music's first function was ceremonial and religious, and it is certainly true in Western Europe that secular music did not evolve until the Middle Ages.

That being said, it is no surprise that Smith should devote an entire disc to religious music. It also true that among both poor whites and poor blacks, the church occupied a central place in the lives of most people. It offered consolation for the hard lives that so many endured by promising them something better after death. The church was also central to the social lives of the people.

Unlike the first disc of "Social Music," the music heard on this disc features the human voice, first and foremost. Voices are heard solo and in various combinations, accompanied and unaccompanied. While instruments are used in religious music both in and outside of the church, the human voice is a constant because it is the one instrument we carry with us at all times. Church singing does not require virtuosity or even talent (although virtuosity is certainly celebrated). All that is required is that the singer praise God through song. Even if the music is not fit for human consumption, it will fall sweetly on the divine ear.

The first thing that the astute listener will notice about the music on this set is that it does not offer anything close to a cross-section of religious traditions. The music on this set is uniformly Christian. It is also uniformly Protestant. No songs from the Jewish, Muslim, Hindu, Buddhist, Zoroastrian, or any other religious tradition are included. Neither are there any Catholic or Eastern Orthodox songs included. All of the songs on this set come from the Baptist, Pentecostal, or Holiness traditions.

Incidentally, if you like what you hear on this disc and want to hear more religious music from the Pre-War American South, I highly recommend Goodbye Babylon, an extraordinary six CD set on Dust-to-Digital. In addition to five discs chock full of some of the most beautiful music you will ever hear, there is a disc made up entirely of sermons from the 1920s and 30s. Included in this set are two full sermons by Rev. J.M. Gates, "Getting Ready for Christmas Day" and "Death Might Be Your Santa Claus" (the sermon that got me into trouble with my sister-in-law, but that's another story). This is well worth the fairly steep price tag. It includes a handsome book of notes and lyrics and comes in a wooden box with raw cotton inside. This is also the set that Bob Dylan gave as a gift to Neil Young. How cool is that?!

The first two tracks on this set are by Rev. J.M. Gates. Little biographical information is available about Gates. Gates was born in 1884. Although no birth place is recorded, it can be assumed that he was born in the state of Georgia, where he lived his entire life. We know nothing of his childhood or of his education. In fact, I haven't even been able to find any clue as to the meaning of his initials. In 1914, Gates became the pastor of Mount Calvary Baptist Church in Rock Dale Park, Atlanta. In 1926, Gates embarked on a career as a recording artist. Gates recorded sermons and songs. His recordings were immediate hits and he quickly became the most popular recording preacher, spawning a host of imitators. He made over 200 recordings between 1926 and his death in 1941, more than 80 of which were made in 1926 alone. While his initial recordings were made for Columbia, Gates also recorded for Banner, Pathe, Okeh, Victor, Vocalion, Paramount and Gennett, all during his first year of recording. 48 of his recordings were made during a trip to New York City in August and September of 1926, including this recording of "Must Be Born Again."

While Gates's recording career stalled for a number of years during the Depression, by 1935 he was recording again and continued to do so until his death (of unknown causes) in 1941.

"Must Be Born Again" is an example of "lining out," a practice during which the leader (often called the "clerk" or "precentor") recites or chants a verse of a hymn (often a Bible verse) which the congregation "responds with the same line, singing one syllable to each note of certain very slow tunes," as Smith states in his notes. It is a form of call and response singing. The practice dates back to 1644, when it was prescribed by the Westminster Assembly (a religious body, appointed by the Long Parliament and tasked with the restructuring of the Church of England). It was used in churches with a small number of literate members or too few hymnals. The practice became so popular that it was often used even when a sufficient number of hymnals were available. It came to America in the 17th century, but by the early 18th century it was already diminishing in popularity in both England and New England. In the American South, however, lining out persisted and is still practiced among some Primitive Baptist congregations. Harper Lee's novel To Kill A Mockingbird features lining out in the sequence when Calpurnia takes the Finch children to church with her. Her son, Zeebo, is shown leading the choir in lining out a hymn.

"Must Be Born Again" is a rare instance in the Anthology where Smith uses only part of a recording. "Must Be Born" again was released as a 12 inch 78 RPM record, giving it a longer playing time than a standard 10 inch disc. The rest of the disc was likely made up of a sermon preached by Gates, which concluded with the lined hymn heard here. Since Smith was only interested in the hymn itself, he excerpted that portion. At one minute and thirty-one seconds, this is one of the shortest selections on the Anthology.

The lyrics to this hymn are a mystery. Gates and his uncredited singers sing the song so slowly that it is impossible to decipher the words. If anyone has any further information, please contact me at wheredeadvoicesgather1@gmail.com or leave a comment below.

The few words that can be made out are "death," "joy," and "love”; about 38 seconds into the recording, Gates sings a brief solo:

Join in the song that sweetly calls...

The second half of this phrase is hard to make out, but it sounds like he says something about "surrounded strong" or "surrounding strong."

The title of the recording (and, one presumes, the sermon) refers to being "born again," a spiritual rebirth that comes from acknowledging and accepting Jesus Christ as one's personal savior and receiving the Holy Spirit. The origin of the term is a verse in the Gospel of John in which Jesus says to Nicodemus, the Pharisee, "Verily, verily, I say unto thee, Except a man be born again, he cannot see the kingdom of God." (John 3:3, KJV) The term is synonymous with salvation among Christians.

The performance is riveting and one immediately understands why Gates was so amazingly popular. His voice is rough and impassioned. His singing is punctuated with ecstatic cries. He sings with complete abandon, as do his congregants. This truly is "a joyful noise."

The second side of this disc, "Oh Death Where Is Thy Sting," is heard as the next selection.

"Must Be Born Again" is the first of eight selections that feature singing groups of various sizes, both accompanied by musical instruments, and unaccompanied.

Here is a video of some absolutely AMAZING preaching by Bishop Melda B. Williams, Senior Pastor at More Grace Redemptive Center in New York City. This is an excerpt of a sermon titled "You Must Be Born Again."

Here's a 1990 performance by the Evangelistic Senior Choir with the late Alma Riggins on lead vocal performing a song called "You Must Be Born Again."