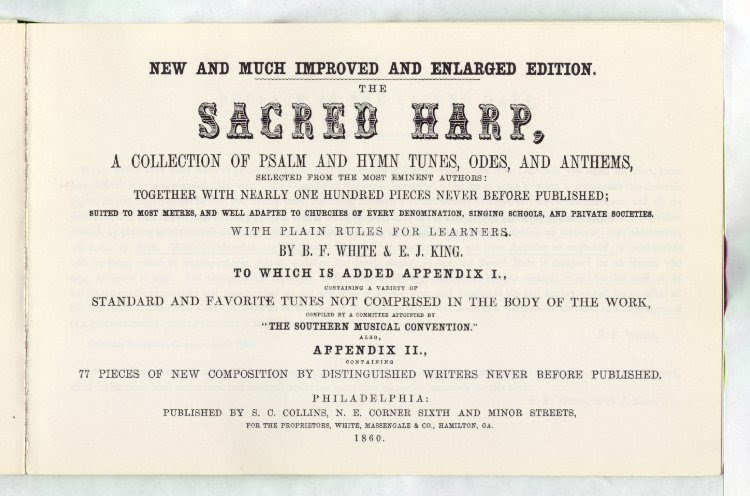 This is the B-side of "Rocky Road" by the Alabama Sacred Harp Singers. For more information on the group, and on Sacred Harp singing in general, see our previous entry.

"Present Joys" was first published in the Sacred Harp songbook in 1908. The tune was composed by A. Marcus Cagle with lyrics by Joseph Cottle. Cagle composed at least twelve other Sacred Harp tunes, including "New Hope," "Soar Away" and "Blissful Dawning."

As was mentioned in our previous entry, Cagle was one of the directors of the Alabama Sacred Harp singers, along with Paine Denson and "Uncle Dock" Owen. I had stated in that entry that "little was known" of Cagle, but Martha Henderson informed me that

Actually, there is plenty known about him. A. Marcus Cagle was famous. He has a number of songs in the Sacred Harp book. There are photos of him and recordings of him speaking. People are alive who remember singing with him.

Nevertheless, I have not been able to find any other information on Cagle. If anyone knows of his birth and/or death dates or can provide any biographical information or a photograph, please e-mail me at wheredeadvoicesgather1@gmail.com or leave a comment below.

We thank the Lord of heav’n and earth,
Who hath preserved us from our birth.

Redeemed us oft from death and dread,
And with Thy gifts our table spread,

In his notes, Smith describes "Present Joys" as a "fuging tune." In his book White Spirituals in the Southern Uplands, George Pullen Jackson describes the structure of the fuging tune:

In the fuging tune all the parts start together and proceed in rhythmic and harmonic unity usually for the space of four measures or one musical sentence. The end of this sentence marks a cessation, a complete melodic close. During the next four measures the four parts set in, one at a time and one measure apart. First the basses take the lead for a phrase a measure long, and as they retire on the second measure to their own proper bass part, the [tenors] take the lead with a sequence that is imitative of, if not identical with, that sung by the basses. The tenors in turn give way to the altos, and they to the trebles, all four parts doing the same passage (though at different pitches) in imitation of the [part in the] preceding measure. ... Following this fuging passage comes a four-measure phrase, with all the parts rhythmically neck and neck, and this closes the piece; though the last eight measures are often repeated.

In "Present Joys," it is during the chorus (beginning with the words "For present joys") that the four parts enter separately, overlapping each other in a manner similar to a round. As in the previous selection, the song opens with the chorus singing the melody through using the "fa-so-la" singing syllables. The reed organ, present on both recordings, is a bit more audible here (possibly because it is not playing in unison with the singers).

The song is a simple song of thanksgiving, thanking a benevolent God for blessings past, present and future, as well as the hope of a heaven to come. This stands in contrast to "Rocky Road," which speaks of the hardships of the material world which are only relieved in death.

"Present Joys" is the second Sacred Harp song in a row and the fourth selection to feature vocal groups.

Here is a performance of "Present Joys" from the 32nd Annual New England Sacred Harp Convention on Saturday, September 29, 2007 at the South Congregational Church.